Boro was a Formula One team from the Netherlands run by Bob and Rody Hoogenboom. Although the team spent most of their existence as either backmarkers or lower midfield runners, Boro are to date the most successful Dutch team to have competed in Formula One, scoring a total of 1 point.

Making their Formula One debut in 1976, Boro were afterthoughts to the majority of the paddock - whom had limited expectations for the tiny Dutch outfit. Despite this, Boro spent a large chunk of their budget on full FOCA membership and travel - leaving their car to be built on a shoestring. Backing came from the Hoogenboom's security firm HB Bewaking, meaning the team ran under the banner of HB Bewaking Alarmsystemen. Recruiting Mexican businessman Héctor Rebaque and Italian F3 driver Gianfranco Brancatelli for driving duties, Boro spent much of the early part of the season barely making the grid, before a merited eighth place in the Soviet Grand Prix from Brancatelli transformed their fortunes - now regularly qualifying for races and running comfortably in the lower end of the mid field. 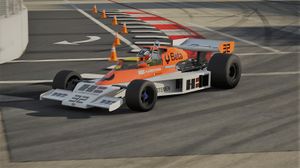 Brambilla on his way to sixth at the 1977 United States Grand Prix West.

A lucky point for the Kojima of Masahiro Hasemi at the Japanese Grand Prix cost Boro 11th in the Constructor's Championship, but the Hoogenboom brothers went into the 1977 season with their heads held high.

It was all change in terms of driver personnel for Boro in 1977, with Brancatelli headed to March and Vittorio Brambilla coming in the opposite direction as well as Swedish nobleman Freddy Kottulinsky replacing Rebaque. The combined wealth of Kottulinsky and Brambilla's sponsors Beta ensured that Boro's next challenger would be built on a much stable platform than before. The team targeted the midfield, and this was almost immediately delivered on - with Brambilla taking a sixth place at the United States Grand Prix West. However, this would prove to be the highlight of the season, as Kottulinsky regularly failed to qualify, and the team's limited budget meant the Boro 002 went undeveloped. Falling further and further off the pace, Brambilla's 7th place in France being the best result from the rest of the season.

Kottulinsky left ahead of 1978, with German veteran Leonhard von Gottorp joining Brambilla at the team. Despite initial promise of the new 003 chassis, the team eventually fell back gradually during the season, even reaching the low heights of failing to pre-qualify for the first time since the 1976 Belgian Grand Prix. The team finished the season on zero points, and the Hoogenboom brothers considered leaving the sport for good.

The consideration eventually didn't follow through, and the dutch team chose to run only a partial schedule in the European races. While the team did start working on the 004 chassis during the off-season, the Hoogenboom brothers met Lola's founder and owner Eric Broadley in the early days of January. Broadley, looking to return to Formula One with the Lola name, had built a ground-effects chassis, and after some negotiations, the british manufacturer and the dutch team created a partnership for the 1979 Formula One season. Vittorio Brambilla was once again brought aboard to drive the Lola T400, being partnered by dutch driver Michael Bleekemolen.