B&S Fabrications was an engineering company that specialised in constructing Formula One parts, and which also ran a privateer Formula One team between 1976 and 1978 before building their own Spartec chassis in 1979. B&S often struggled in World Championship events, with a best finish of 12th place by Divina Galica at the 1976 British Grand Prix, although they were also regular competitors in non-Championship Formula One races, with their best result of 10th at the 1979 Race of Champions.

Whilst B&S Fabrications continued their business as a supplier of motorsports parts, business partner John Woodington was given the responsibility of taking the helm of the team's entry into Formula One. For their debut season in 1976, the team purchased two-year-old March 741 chassis and Ford Cosworth engines, with the cars to be driven by a selection of pay drivers. No fewer than five different drivers would compete for the team, escaping from pre-qualifying a total of four times between them and to the race proper twice. The team's best result was provided by former Olympian Divina Galica, who finished in 12th place in the 1976 British Grand Prix at Brands Hatch, the team's home race. Three more failures to make the grid would follow but Galica's 12th place helped the team to finish 17th in the Entrants' Championship. Despite this, money was tight by the end of the season. 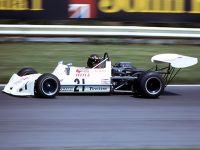 The B&S March-Renzo; the engine would not fit under its cover.

Faced with financial difficulty, things looked bleak for the team heading into 1977. The now three-year-old Marches were kept, but a further blow was struck when both of the Cosworth engines failed irreparably during a pre-season testing session. The cash-strapped team was forced to purchase the experimental (but very cheap) Renzo V8 engines which proved to be both uncompetitive and unreliable. In a questionable display, Woodington opted to sell the team's race seats to drivers looking for experience. No fewer than twelve drivers would represent the team over the course of the season, but few stayed around for longer than they had to in a team that was barely faster than the Dywas and Wheatcrofts at the bottom of the pre-qualifying timesheets. The team continued to bleed money with little to show for it, and were forced to curtail their European season after the German Grand Prix without ever escaping prequalifying. Only Divina Galica and Conny Andersson represented the team more than once in 1977, but one small olive branch came at the British Grand Prix, where the Tony Brise Memorial Trophy offered B&S some valuable track time in which she managed to score a 17th-place finish.

The 1978 season was another painful one for B&S; unable to procure new machinery, the team planned only to attend the Championship rounds at Brands Hatch and Hockenheim respectively, in addition to the Race of Champions also at Brands Hatch. To do this, they retained the services of Galica and Andersson. However, as the season came to a close, Dywa Grand Prix Series driver Luciano Sighinolfi approached the team to ask if he could offer the funding for them to attend the Italian Grand Prix at Monza so as to familiarise himself with Monza in a suitably fast car.[1] The team did so and despite bringing their tally of DNPQs for the season to three, Sighinolfi lauded it as a useful experience and saying that he was "proud to now be a Formula One driver". By season's end, there were rumours that team might move out of Formula One after another season in which the only times they made the starting grid were non-Championship events, although Conny Andersson's 16th-place at the Tony Brise Memorial Trophy was a one-place improvement on the previous year.

The Spartec G71A was the first Formula One car built by B&S.

Despite the expectations of many, B&S did not fold ahead of the 1979 season. With the news that their long-suffering March 741s were to be illegal for the coming season, some doubted that B&S would be able to source a new car, even with Bob Sparshott's insistence that it had "forced us to look forward, not back."[2] Instead, with Bob Sparshott taking on a more hands-on role in managing the team, they set about conducting their most ambitious program yet: not only did the team return to contesting all Championship events in Europe, also made the unexpected move of building their own Formula One car for the first time ever. The car, dubbed the Spartec G71A would be powered by Ford engines, not the Renzos the team had been stuck with for the past two seasons.[3] Much of the money to do this came from the team's two new drivers, Freddy Kottulinsky and Lella Lombardi, who would be contesting nine rounds each. The remaining drives were offered to two local drivers at their respective Grands Prix: Luciano Sighinolfi at Imola and Monza, and Rupert Keegan at Silverstone and Brands Hatch. This left the long-serving Galica out of a drive, although Sparshott insisted that she was still an important member of the team as a test driver, and that they intended that she continue to drive in non-Championship Formula One events.[4]

During the 1979 season, the Formula One paddock was left generally baffled by comments in which Sparshott intimated that his team had a plan and that another season in which the team failed to make it out of prequalifying was a part of that plan. In an interview with the Luton Herald and Post, Sparshott suggested that the team could yet "sit at the same table" as Williams and McLaren, and that their next car could "challenge for World Championship points". [5]. Such statements were met with widespread derision coming from the owner of a team with over 20 consecutive failures to prequalify over the preceding four seasons. However, as the season drew to a close, news of investment into B&S Fabrications began to emerge: first to break was that the owners of the British Formula One Racing Team had chosen to redirect their investment towards B&S in light of the news that teams would be required to commit to a full World Championship season. [6]. Shortly thereafter, Count Rodolphe van der Straten-Panthoz also redirected his investment from his eponymous VDS Racing team and into B&S, in return for an opportunity being given to a Belgian driver at the 1980 Belgian Grand Prix. [7]. However, the biggest news came after the season had ended, when the Auto Racing Sporting Enquirer broke the news that Team Lotus would be making an unprecedented investment into the Spartec project, to the tune of £800,000. [8] This investment stunned the paddock, even after it later emerged that the investment would be used to develop a prototype Hart turbo engine ahead of the 1980 season which might have been deemed too risky for the Lotus works outfit; the story was broken by Sue Jawhard, who incriminated herself in criminal matters by doing so. [9]

As a result of this flurry of investments, as well as earnings made throughout the 1979 season, B&S Fabrications were able to build the brand-new Spartec G71B for the 1980 season, powered by the prototype Hart turbo engines. This made them only the second team to run a turbocharged engine in Formula One without the backing of an automobile manufacturer, the first being the chaotic Dywa-Renzo outfit in late 1979.

Despite the questionable attributes of their new Spartec Formula One car, B&S Fabrications were also approached by Bernie Ecclestone to prepare a field of 24 BMW M1 Procars for a new-for-1979 Formula One support series. In return for their efforts, B&S were granted an entry for a two-car team in the series. The Luton outfit approached long-standing Formula One driver Divina Galica and recovering ex-Dywa GP driver Kelby Rogerson, who was making his comeback into motorsports after a devastating spinal injury sustained at the Coppa Renzo Bizzarri ended his open-wheel career.