Masahiro Hasemi (長谷見 昌弘, Hasemi Masahiro, born 13 November 1945, in Tokyo, Japan) is a Japanese former racing driver most notable for his appearances in Formula One and World Touring Car Masters. 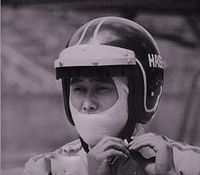 Masahiro Hasemi made his Formula One racing debut at the inaugural Japanese Grand Prix for the unfancied Kojima Engineering at Fuji Speedway alongside Canadian rookie Gilles Villeneuve.

Against all odds, Hasemi brought the Kojima-Ford home in sixth place, scoring a point on his and his team's debut.

Following his excellent result at Fuji the previous year, Hasemi was courted by several larger teams including Hesketh and Penske over the winter period. Hasemi spurned these advances and remained with the Kojima team for their sole entry in Japan.

Hasemi would receive a surprising call-up by the McLaren team for the Italian Grand Prix, to replace Frenchman René Arnoux, who had been sacked by the team for poor performance. In his first outing at Monza, he drove respectably until a bizarre accident at the Ascari chicane, where he tried to swerve out of the way of a stricken competitor at the Variante Ascari and broke his car on the kerb. He failed to qualify at the Canadian Grand Prix, but had no such issues for the season finale at Watkins Glen where he finished a strong 9th, admittedly as a result of the heavy attrition throughout that race. Nevertheless, the professional performances impressed Teddy Mayer, so much so that Hasemi was unexpectedly retained by the team for a full-time drive in 1979 and given a two-year contract. He would be paired with the equally-surprising signing of Belgian veteran Jacky Ickx whom Teddy Mayer had been looking to sign in years before, one of the many bizarre outcomes of the chaotic 1978-1979 offseason. He proved able to justify Mayer's decision by finishing the first race of the 1979 season in the points.

The newly formed World Touring Car Masters saw Nissan join the championship with three new Nissan Skyline R32s driven by Hasemi, Naoki Nagasaka and Kenji Katayama. The Skyline dominated the opening round in Australia, with Hasemi winning the Endurance race - but a protest from Ford saw the Skyline R32 have its homogolation withdrawn by the FIA for the rest of the season. The ruling saw Nissan return to the Skyline R31 GTS-R in the B Class division. The R31 proved quick for Hasemi and he took eight class wins over the course of the season on the way to third in class behind Nagasaka and independent driver Francisco Hernandez.

Unfortunately for Hasemi, his season would be a short one - after failing to qualify for the season opening race at Fuji Speedway, Hasemi was involved in a huge wreck at the Watkins Glen raceway which saw him suffer two broken legs - ending his season.

Hasemi was replaced by Impul's Kazuyoshi Hoshino, who in turn suffered an injury in the same car at the following round. Hoshino was replaced by 1988 Class D champion Andrea Geisler.