Rhys Davies (born 11th August 1978 in Goulburn, NSW) is an Australian racing driver. He is currently the only person to have won both the Formula One (in 2003) and AutoReject World Series (in 2016) World Championships. 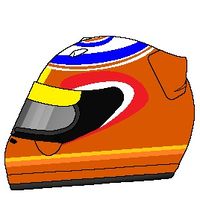 Born in Goulburn, Davies first got involved in motorsports at the fairly late age of 16, when he turned up for a track day at Wakefield Park. ATCC driver John Zimmer spotted Davies there and signed him to drive for his Australian Formula Ford team, ZimSport. Davies was immediately successful, finishing second in the 1994 season. ZimSport moved up to Australian Formula 3, and took Davies with them, where he won the 1995 and 1996 championships. In 1997, he was hired to take part in the International Formula 3000 championship with Draco Engineering, and finished a respectable 10th place. He managed to gain the attention of the Sauber F1 Team, and became their test driver for 1998.

In 1999, Davies made the step up into Formula One, driving for Red Bull Sauber Petronas alongside former Ferrari tester Luca Badoer. Davies' race debut came in the Australian Grand Prix, where he finished a respectable eighth place. One race later in Brazil, Davies scored his first point in Formula One with a sixth place ahead of Badoer. Davies' next score came in the Austrian Grand Prix, where he and Badoer took a fifth and sixth place respectively for Sauber. This would end up being the Swiss team's only double points finish in 1999, as Davies only scored once more this year - a sixth place finish in Belgium.

2000 saw Badoer depart the team, with 1999 runner-up David Coulthard moving to Sauber from Ferrari. With Coulthard, Davies had a real yardstick to measure himself against - and Davies landed the first blow with an impressive fifth place in the season opener in Australia. Despite the promising result in the first race, Sauber's package for 2000 was particularly competitive, with Davies' fourth place finish in the European Grand Prix his and Sauber's best result of the year.

Growing frustrated with a lack of progress at Sauber, Davies engineered a move to the BMW WilliamsF1 Team alongside Ralf Schumacher. This proved to be a masterstroke for the Australian, with the Williams FW23 seemingly the car to beat. Davies opened his 2001 account with four straight third place finishes, soon followed by a career first win at the Austrian Grand Prix. Davies took six more podiums in 2001, including a second win at the European Grand Prix as his teammate Schumacher beat out his brother Michael for the title. Davies finished his first season at Williams in third place. 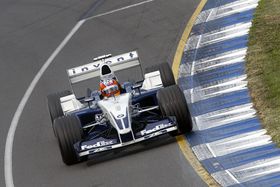 2002 came along and it initially seemed like the Williams was once again going to be a title winner, with Davies picking up wins in Australia and San Marino - however, after the third race Ferrari's dominant F2002 made its competitive bow and dominated the rest of the season. Despite several podiums and 69 points, Davies would have to settle for second place in the Driver's standings behind the dominant Michael Schumacher.

Williams, Ferrari and McLaren would be met by another challenger in 2003, with the emergence of Renault as a serious contender blowing the title race completely open. With this, every point score was especially precious. Rhys' namesake James James Davies of McLaren drew blood first, with the Brit taking the honours in Australia. Rhys Davies waited three races before opening his wins account for 2003, taking the flag in San Marino for a second time. Davies took several more podiums throughout the year and a second win of the season in Brazil. Strong efforts from Rhys Davies, James James Davies and Michael Schumacher saw the title go down the final race in a three way tussle. In the end, it was Davies who'd take the crown, albeit after a controversial Japanese Grand Prix where the Australian was initially disqualified from the race following contact with JJD - thus handing the title to Schumacher - before the DQ was overturned later on at the Court of Arbitration for Sport.

Davies' title defence was unsuccessful in 2004, thanks to the shortened calendar meaning less opportunity to develop the car, Ferrari's F2004 being the dominant car, and Williams' disqualification from the Canadian Grand Prix for illegal brake ducts. Davies would finish 4th in the championship with 38 points, equal with teammate Ralf Schumacher but the German was placed ahead on countback thanks to taking a win when Davies did not.

2005 came around and Davies would be joined by popular young Briton Jenson Button at Williams. Despite the car initially being promising early on in the season, Davies taking a hat trick at his home grand prix, Williams were left standing still as the season progressed, falling down into the midfield. Davies would finish 10th in the championship with 39 points, 2 less than Button.

BMW would end their successful partnership with Williams, citing a poor 2005 as the reason for leaving them, and went to supply Sauber for leaving them. Williams were then forced to partner up with Cosworth for 2006, putting them on the back foot when the season began. Davies would score a podium in the opening race at Bahrain, but the Williams was generally off the pace and unreliable that year, although for his efforts, Davies finished 13th in the championship with 19 points, more than double that of his teammate.

For 2007, Davies was joined by Brazilian Rubens Barrichello after Button left to join Renault, with a new Honda engine deal after Cosworth left Formula One. The Williams was poor early on, although Davies scored a point at a cold Japanese Grand Prix, with the FW29 becoming a semi-regular points scorer by seasons end, with Davies managing to generally outperform Barrichello, before the Brazilian's departure before his home race and was replaced by Jean-Maxime Bachot, who outqualified the Australian but hit his pitcrew which left him to finish 12th. Davies achieved a best finish of 4th at the Turkish Grand Prix and was 12th in the championship with 13 points.

Williams found some stability in the engine department in 2008, retaining the Honda motors, and Button returned to the team following another falling-out with Flavio Briatore. Davies would be quite easily outperformed by the newly-determined Brit, scoring less than half the points of Button and was outraced by him in two-thirds of the races that they both finished. The Australian was left in 15th in the championship, his lowest finish of his career at that point, with 10 points and a best finish of 5th, again at Turkey.

Davies reunited with his former Sauber teammate when Luca Badoer joined Williams from Ferrari ahead of the 2009 season.

A new two-race format in 2010 was the new challenge for Davies and the Australian was readying himself for yet another tough season with Williams - his contract in it's final year. Davies seemed to do fairly well under the new format and even won twice of the course of the season on his way to 10th.

Davies made the jump back to a newly independent Sauber in 2011 when the Swiss team had brokered a deal for Ferrari engines - effectively turning Sauber into the Scuderia's "B team". This status would be emphasised when Davies was called upon by Ferrari to replace Ferrari's Fernando Alonso on a number of occasions before the move was made permanent midway through the year in order to help Robert Kubica win the title. Once Davies made the jump to Ferrari, he took five wins over the course of the season which was enough to deliver him to fifth in the championship as well securing the Constructor's crown.

After an extended stint in the rival F1RWRS, Davies made an highly-anticipated return to F1 with the new works Holden Racing Team. With the team also signing four time Formula One champion Daniel Melrose, a fellow Australian, as his teammate, many expected the team to be instantly competitive. However, the car proved to be a great disappointment, as both drivers complained of a general lack of grip, rendering both as midfield also-rans - Davies' best results a fifth in Great Britain and Mexico. Davies finished the season in 16th place which was enough to convince Davies to step away from F1 once more.

For 2012, Davies followed the footsteps of many of his fellow F1 drivers including Sammy Jones, Phoenix McAllister and Melrose into the F1RWRS where he was signed for the Holden Racing Team alongside another former F1 star in Frank Zimmer