Frank Zimmer is an Australian racing driver (born 11th January 1983 in Orange, NSW), who was a V8 Supercar champion in 2005, as well as a Formula One frontrunner and F1RWRS race winner. 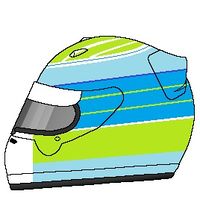 Zimmer made his debut in the Australian Formula Ford Series in 1999, racing for his elder brother's team, finishin fifth in the championship with a race win at Calder Park. He would continue to race in 2000, before winning the championship in 2001, winning both rounds in New South Wales at Eastern Creek and Oran Park, as well as the final round at Sandown.

In 2002 he graduated to the V8 Supercar Development Series, driving a Holden VS Commodore for MW Motorsport. He won a race at Wakefield Park, finishing 6th in the championship, beating his boss Matthew White. The following year, he was promoted to the Holden Young Lions team, where he duelled with the Ford-backed Mark Winterbottom for the title, ultimately losing out by 20 points, losing out on dropped points despite scoring more. His early performances were enough for him to receive an endurance drive for Garry Rogers Motorsport, where he drove with Nathan Pretty at Sandown and Bathurst. Together they finished 20th at Sandown, but an engine failure shortly after he got in the car at Mount Panorama put him out of the race.

His performance in the development series was enough to convince Rogers to give him a full time drive in 2004, replacing Jamie Whincup in the #33 Commodore. He drove well enough to win at Winton, and partnering Garth Tander in the #34, they won the race at Sandown. Zimmer matched Tander well, finishing just behind him in the championship, 11th overall with Tander 10th. Unfortunately, they retired once again at Bathurst, after dropping a cylinder going across the top of the mountain.

2005 was his breakthrough year. With Tander leaving for the HSV Dealer Team, Rogers hired Cameron McConville to replace him. Zimmer immediately won at the season-opening Clipsal 500 Adelaide, and after winning the rounds at Eastern Creek, Shanghai, Surfers Paradise and Symmons Plains, as well as the Sandown 500 for the second time, to beat the Fords of Craig Lowndes, Marcos Ambrose and Russell Ingall to the title. But once again, he struck engine trouble at Bathurst, retiring from 2nd place with 30 laps to go.

In 2006, he decided to move to Europe for a change of scenery. He left GRM on good terms with Garry, and with the help of his brother John, secured a drive with iSport in the GP2 Series. He had some difficulty getting adapted to the cars, and only managed to finish 7th in the championship with no race wins.

Zimmer returned to Australia to race for GRM at Sandown, the week before the GP2 finale at Monza, as well at Bathurst, where he finally managed to finish a race, in 7th place. Upon returning to Europe, he tried to find another GP2 drive, but couldn't secure one.

However, late in the off-season, Zimmer received an offer from F1 team owner Aguri Suzuki to drive for his F1 team, Super Aguri. He accepted the drive, and spent the season doing fairly well for himself despite not scoring any points, not even finishing in the top 10. In fact, he was signed to drive for Honda in 2008, where he was often in front of teammate Jenson Button. He scored 7 points in the first six races, but the car was not fast or reliable enough to score again for the rest of the year. He did however get into strife at the Brazilian GP for setting his car on fire.

In 2009, he stuck with the Honda team as they were sold and bought by Ross Brawn, becoming Brawn GP. Zimmer scored the occasional podium, but Button was the better driver for the Brawn team, although both were taken to the cleaners by Daniel Melrose. Zimmer did not drive at the Japanese Grand Prix that year, as he was preparing himself for a return to Bathurst. This angered his team, who promptly sacked him. Zimmer didn't care however, as he won his first Bathurst 1000, again teaming up with Lee Holdsworth. He spent the remainder of 2009 setting up a rival series to F1, and called it the F1RWRS