Ralf Schumacher (born 30 June, 1975 in Hürth, West Germany) is a German former Formula One driver who won the Drivers Championship in 2001. 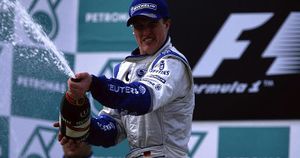 Ralf Schumacher, pictured on the podium after finishing second in the 2001 Malaysian Grand Prix.

Ralf Schumacher is the younger brother of fellow Formula One World Champion Michael Schumacher, whom raced in F1 during the same time period. His son David and nephew Mick are both racing drivers, and are racing in European F3 and Formula 2 respectively.

After making his F1 debut the year before, Schumacher raced for the Benson and Hedges Jordan team in 1998 alongside Jack Christopherson. Schumacher would be a regular points scorer in 1998, his best results being a pair of third places in Spain and Belgium. He'd finish the 1998 season in eighth place overall.

Schumacher and Williams' Heinz-Harald Frentzen would make a straight swap ahead of the 1999 season, seeing Schumacher partner with former Arrows driver Giancarlo Fisichella in an all-new lineup for the British team. Unfortunately for Schumacher, he'd make the swap ahead of a season where Jordan would step up as the 'third' team in Formula One. His best result would be a third place in the season-ending Portuguese Grand Prix and finished the season in ninth place overall.

In 2000, Schumacher would be joined by British rookie Jenson Button at Williams with a car that appeared to show some promise in the early parts of the season - with his young teammate getting two good results in the opening races. However, this promise wouldn't last and the team was frequently fighting for the lower paying points positions. Schumacher would get another two podiums in this season on his way to eighth in the championship.

The next year, Schumacher was joined by another rookie in Rhys Davies but was given access to a car capable of strong results for the first time. The FW23 was a marvel from the word go, and Schumacher would take his maiden Grand Prix win at the season opening Australian Grand Prix. Schumacher and Davies would pick up several wins over the course of the season and at the end of the year Schumacher would take his first World Driver's Championship - stealing the trophy from his older brother Michael.

Schumacher was unable to successfully defend his title in 2002 due to the dominance of his brother Michael and the Ferrari team. Ralf Schumacher did not take any wins in 2002 on his way to fourth in the standings.

The following year, Schumacher had much better results than 2002 - taking three wins over the course of the season. However, he was forced to play rear gunner to teammate Davies, whom captured the title. Schumacher finished the year in fifth.

2004 saw a shortened season where Ferrari dominated proceedings, with Schumacher being one of only two non-Ferrari drivers (the other being Renault's Fernando Alonso) to take a win this season when he took the flag in the Bahrain Grand Prix - enough for third in the championship.

Japanese manufacturer Toyota upped their investment in 2005, opting to sign Schumacher on an initial two year deal to lead their team alongside Mark Webber. Schumacher took an unexpected championship lead after the first two rounds when he took a second in Australia and Toyota's first ever race win one race later in Malaysia. Schumacher and Toyota gradually reverted to their more rightful position in the standings but the German continued to be a regular podium finisher on his way to sixth in the championship.

Schumacher only managed a single podium in 2006 - with a third place in the Uruguayan Grand Prix.

2007 would prove to be the German's last season with the team. In the middle of the season, he managed a few points finishes, including his best finish of 5th at Canada, before going on a 10-race pointless streak. He would thus be comprehensively be beaten by teammate Webber, scoring 8 points compared to the Australian's 35, which was seen as disappointing especially considering he was the third-highest paid driver on the grid, taking home around $20 million. He would be replaced by compatriot André Lotterer for 2008.

For 2008, Schumacher would move to the newly-created Force India team, alongside fellow German Adrian Sutil.