Mario Gabriele Andretti (born 28 February 1940 in Montona, Istria, Kingdom of Italy) is an Italian-American racing car driver. Andretti has competed in several top-level series including IndyCar, NASCAR and Formula One. He is a two-time Formula One World Champion from 1977 and 1978, both times driving for Lotus. With a hugely successful career spanning multiple decades, Mario Andretti is widely considered one of the greatest racing drivers of all time. 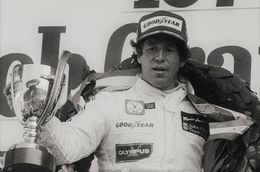 In 1976, Mario Andretti raced for the John Player Team Lotus team, initially alongside Swede Ronnie Peterson - whom would later be replaced by Frenchman Patrick Tambay due to injury. The latter would take a win at the season-ending Japanese Grand Prix, where Andretti himself was on track to a second place finish before dropping out in the closing laps with engine gremlins.

Despite not taking a win all season, his consistent pace throughout the whole year - which saw him visit the podium a total of 5 times - meant Andretti would finish in third place overall in the driver's championship. 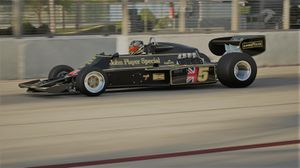 1977 saw Andretti remain at the Lotus team, this time using the revolutionary Lotus 78 - one of the first cars to take advantage of the "ground effect" theorem of race car design. Andretti would be joined this time by Briton Thomas Nurmester.

Rather like 1976, the season would start promisingly, with a pair of second places followed by a win at the Spanish Grand Prix meant that Andretti would go on to take an early lead in the championship. A nightmare weekend in Belgium saw Andretti recover to finish 9th after an early race incident, but in contrast Monaco would be the perfect weekend: pole by 6 tenths of a second, fastest lap, and a commanding victory kept him at the top of the standings.

Andretti would take his third win of the season in the Soviet Grand Prix, ahead of fellow American Tom Sneva. The Soviet Grand Prix podium presentations were marred with controversy, as the American flags of Andretti and Sneva were inexplicably replaced by Italian flags. Race organisers blamed the display on an ‘administrative error’, although many believe this was a political statement.

More podiums followed for the rest of the season, and despite retiring from the United States Grand Prix - a retirement for championship rival Jody Scheckter meant that Andretti's championship win would come at his home race in front of his adoring fans.

Andretti signed a new two-year contract with Lotus after becoming champion, and again would be partnered by Thomas Nurmester. However, Andretti's season would not get off to a brilliant start - retirement in Argentina and spinning out of the lead in South Africa meant that Andretti would go the first two rounds of the season with no points on the board. However, the Lotus 79 came into it's own as the season progressed, with Andretti going on to take five victories en route to his second successive world championship.

Both of Mario's sons; Michael and Jeff became racing drivers. Michael Andretti became the owner of Andretti-Green Racing in 2003. The team, now known as Andretti Autosport has competed in the IndyCar series ever since - winning the title in 2012.