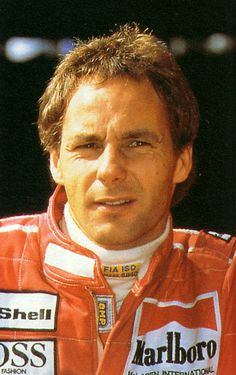 Gerhard Berger (born 27th August, 1959 in Wörgl, Austria) is an Austrian former racing driver who won the Formula One World Championship in 1987 and 1990.

By 1987, Berger was driving for Marlboro McLaren International alongside French prospect Jérémy-Étienne Voeckler. Berger's season got off to a good start in Australia, taking the flag ahead of season-long rival Brendon Cassidy. However, it seemed that reliability was a serious issue for Berger's side of the McLaren garage, as he'd go on a seven race streak of retirements before a second place finish in Hungary and a win in Yugoslavia.

Cassidy appeared to be in the box seat heading into the last few races of the season, but in the end Berger was able to score the wins when they were needed and managed to take victory in the last two races - winning the title by a single point.

In 1989, Voeckler jumped ship to the more promising Williams outfit - and Berger was joined at McLaren by Teo Fabi. Despite the chronic unreliability of the new Honda V10 engines, Berger again challenged for the title, this time against Ferrari driver Ayrton Senna, with both taking five wins but Senna winning the title by a comfortable 15 point margin over Berger. Fabi's lacklustre performance alongside Berger also resulted in the Italian being fired, his replacement being Alessandro Nannini, who proved to be far closer pace-wise to Berger than Fabi had been, and would be retained alongside the Austrian into 1990.

Berger was able to capitalise on the MP4-5B's improved reliability in 1990, taking 4 wins and battling Arrows driver Chris Dagnall during the season to take his second world championship with an ultimately comfortable 21 point margin.

Nannini was injured in a helicopter crash and replaced by American Brendon Cassidy for the last two races of the season, with the pair remaining in situ for 1991. McLaren were a dominant force that year, but Cassidy would ultimately pip Berger to the title by 19 points - the Austrian suffering more reliability issues.

The pair would remain at the team for 1992, however McLaren that year had been relegated to third best, behind both the dominant Williams and the Arrows team. The two would be fairly evenly matched over the course of the season, although Berger would come through to score what would be the team's only win that year at the Japanese Grand Prix. He would end the year a comparatively measly fifth in the standings, his lowest since joining McLaren.

There were several changes in the McLaren team for 1993 - Cassidy opted to leave Formula One and was replaced by Lotus driver Mika Häkkinen and the team's successful five season partnership with Honda came to an end; the unconventional Hart engines would power the new MP4/8 instead. Up front however, Williams maintained their dominance from the previous season. McLaren and Arrows were locked into a battle for second place - the latter having more pace but the former having more reliability. Berger would capitalise on the exclusion of Arrows and the withdrawal of Williams from the Canadian Grand Prix and win easily - however the event was marred by teammate Häkkinen crashing out and breaking both of his legs. The Finn would not return to the cockpit until the Japanese Grand Prix. This led to an old face returning to the team - Jérémy-Étienne Voeckler made his comeback to the team, re-establishing the successful partnership that won the team both titles in 1988. Voeckler was immediately able to get up to pace, leading Berger into a 1-2 finish at his second outing for the team. Berger would win once more at Spa to ensure he was best of the rest in 1993 behind the Williams pair of Chris Dagnall and Jack Christopherson and the pair used their experience to take advantage of the inconsistency and recklessness of Arrows drivers Michael Schumacher and Paul Tracy to put McLaren in second place in the Constructor's Championship.