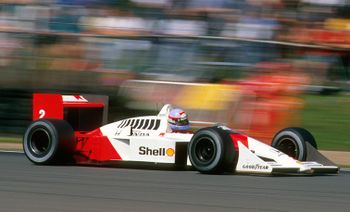 Jérémy-Étienne Voeckler, driving for McLaren in 1988

Jérémy-Étienne Voeckler (born February 17, 1960 in 16ème Arrondissement, Paris, France) is a French professional racing driver and team principal. He is part of the Voeckler family of racing drivers; the elder brother of fellow Formula One driver Frédéric-Maxime Voeckler. He was the Formula One World Drivers Champion in 1988, driving for Honda Marlboro McLaren.

A successful 1979 FIA European Formula 3 season with Ecurie Elf saw Voeckler earn the interest of Renault. Their funding secured him a full season in European Formula 2. A solid start to the season, including a win in the season-opening round at Thruxton, resulted Hesketh offer Voeckler a handful of races in Formula One.

Voeckler would make the switch to McLaren rivals Williams ahead of the 1989 season as part of Renault's return to the sport. He teamed up with English fan favourite Nigel Mansell. However, his title defence was a complete failure and he finished the season in seventh place - his best results being a pair of second place finishes. Voeckler's relationship with Williams briefly hung in the balance when he took part in a number of World Touring Car Masters races for his family-run team. A unknown member of Williams management had spoken to a journalist from The Generic Times in a hotel bar and alleged that Voeckler could be sacked for these offences despite Renault's objections. Once the media storm began, Voeckler was courted by a number of outfits for the 1990 season (most notable was an audacious offer from AGS owner Henri Julien) before Williams and Voeckler denounced the rumours in a joint conference.

1990 saw Voeckler team up with another French superstar in the form of Ferrari refugee Alain Prost, with Mansell moving in the other direction. Voeckler and Williams had a relatively average season - taking a solitary win at Imola and finishing the year 6th in the championship, earning himself 30 points.

In 1991, the lineup remained the same, but with Williams taking a gamble by taking on Pirelli tyres - more renowned for their qualifying pace than their race performance. This mostly came true - Voeckler took 7 straight pole positions in the middle of the season, but in the races the tyres just could not keep up with the Goodyear rubber McLaren and Arrows brandished. Nevertheless, Voeckler was clearly bested by teammate Prost - who was simply much better at managing his tyres. Voeckler also made several errors in the season - he was beaten by Michele Alboreto in the notably inferior Minardi at the circuit he had won at only a year previously, and spun out early at Hockenheim and barely made it into the points. However, after retiring from the Hungarian Grand Prix with an arguably self-inflicted puncture, it was over. Williams terminated Voeckler’s contract with immediate effect despite the misgivings of their engine supplier, and he was replaced by young Brit Jack Christopherson. He ended the year 8th in the championship with a comparatively measly 18 points - a shadow of a man who had won his first world championship just three years previously.

After spending 1992 out of the sport, in 1993 Voeckler opted to return to McLaren as the team's test driver, using his experience to help the team going forward.

Voeckler was not expecting to race that year but when Mika Häkkinen broke his legs at the Canadian Grand Prix the Frenchman stepped into the seat to fill in for the young Finn until he was able to return to the car at the Japanese Grand Prix. Voeckler's opening comeback drive at the French Grand Prix went well as he ultimately finished in 2nd place in front of his home crowd.

Jérémy-Étienne, along with his brother Frédéric-Maxime, has worked as a team principal of Voeckler Grand Prix Engineering since his father Jean-François handed the reins of the team to the pair in the early 2000s. A series of acquisitions in the following years has seen Voeckler become one of the largest motorsport companies in the world.

Jérémy-Étienne has two sons - Alexandre-Laurent and Timothée with his wife. Alexandre-Laurent raced in Formula One with Renault, Ferrari, Villeneuve and Sauber - winning two races throughout his career at the top level. His other son, Timothée also raced cars but is more notable as a professional cyclist.