André Lotterer (born 19 November 1981 in Duisburg, Germany) is a German racing driver currently competing in the FIA Endurance Challenge, but is also known for his appearances in other categories, such as Formula One or Super Formula, among others. Lotterer won the Super Formula title in 2018. 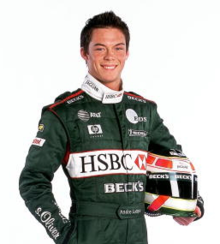 Lotterer began the 2002 season as test driver for the Jaguar team, helping regular drivers Pedro de la Rosa and Mark Webber develop the car throughout the season. In the early stages of the season, it became apparent that the R3, mainly developed by Webber the year before, was not suited to team leader De la Rosa - whereas Webber was able to score in the car early on in the year.

Jaguar became tired of their star driver's performances and would sack De la Rosa ahead of the French Grand Prix, replacing him with Lotterer. Lotterer would immediately repay this confidence by scoring a single point in the race. Neither he nor Webber would score any more points that year.

Lotterer remained at Jaguar in 2003, this time joined by David Coulthard. After the withdrawal of Michelin-shod teams at the Italian Grand Prix - Lotterer would take his maiden F1 podium in the race - taking advantage of the depleted field to finish the race in second position. Lotterer left Formula One at the end of 2003 when Jaguar's purse strings tightened and when a possible move to Ferrari was shelved.

In the years away from Formula One, Lotterer moved to Japan in order to take part in Formula Nippon and Super GT for Toyota and TOM's. This relationship lead to Lotterer being signed by Toyota for their Formula One effort alongside Kazuki Nakajima initially - before the Japanese driver was replaced by Mark Webber - reuniting the pair who worked together at Jaguar nearly half a decade ago. Lotterer took a third place in the Australian Grand Prix and continued consistently scoring points throughout the year, eventually finishing eighth in the standings.

In 2009 Lotterer had a similarly good run throughout the year, scoring 3 podiums and otherwise consistently scoring points, before a crash in qualifying prevented him from starting the Chinese Grand Prix, where he then announced his departure from the team, citing a lack of motivation and dismay at the recent demise of both Brawn and Prodrive and the FIA's failure to save either team from collapse.