Jarno Trulli (born 13 July 1974 in Pescara, Italy) is an Italian racing driver best known for his appearances in Formula One. Throughout his racing career, Trulli was renowned for his skill in qualifying, regularly achieving far better grid positions than rivals with superior cars to his own. He was also known for his defensive driving style which allowed him to successfully hold off quicker drivers, sometimes for an entire race. 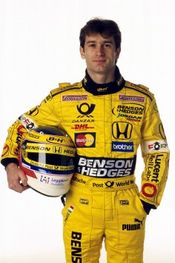 Trulli, pictured whilst driving for Jordan

1998 saw Trulli line up on the grid with the Prost team partnering Olivier Panis. The AP01 was a fairly unremarkable vehicle - however Trulli did manage to get one strong result, with a fourth place in the French Grand Prix - the only point score all year.

Having spent a year as a reserve driver at Ferrari, Trulli returned to the grid with the Jordan team alongside former McLaren driver James James Davies. In the early stages of the season, it appeared Trulli had the better of his British teammate - taking a few decent points scores but he began to slip behind Davies after the mid-point of the season. After ten straight races without a point, Trulli was dropped from the race seat in favour of Ricardo Zonta.

After spending 2005 and 2006 as reserve driver for the Williams team, Trulli would eventually make his second comeback to F1 with the Force India team in 2009 alongside Adrian Sutil. The VJM02 was initially unremarkable, Trulli only managing a pair of 8ths as he scraped into the points at Turkey and Germany. However, at the Belgian Grand Prix, Trulli scored a sensational and popular pole position for the team, converting that into a solid 4th place finish on race day. However, despite this success, Trulli was ousted by the team in favour of Bruno Spengler before his home race at the Italian Grand Prix, at the behest of the team's engine suppliers Mercedes.

Trulli's third return to the F1 grid came to 2012, for the Williams team - initially as a replacement for Esteban Guerrieri after the Argentine was banned from the Korean Grand Prix, and the Italian would take his maiden victory at his first race in almost three years. After the next race, Trulli replaced Guerrieri full-time, and would eventually go on to finish 6th in the championship with 224 points, taking 4 victories as well as a pole position at his home race.

After his breakout 2012 season, Trulli was signed by the Brabham team for 2013, alongside multiple world champion Michael Schumacher. In an almost direct repeat of 2001, Trulli would have the edge on his German teammate for the first half of the season, taking 5 pole positions and a win at the Austrian Grand Prix. In the second half of the season, Brabham would slip down the order, but Trulli would struggle to even score points by the end of the season. He was left in 10th in the championship, with 150 points, and after the team decided not to retain him for 2014, the Italian opted to retire from Formula One.

Trulli came aboard Fernando Alonso Speed Team in 2021 as a Driver Coach, helping the team train its young drivers Esteban Ocon and Charles Leclerc. In the run-up to the Singapore Grand Prix, Ferrari announced that Trulli would join them for the final race on loan from FAST, replacing Dave Cassidy after the American's contract was terminated. The move was met with vocal criticism of Ferrari management and the FIA for awarding Trulli a superlicense, as well as widespread confusion. By entering the Singapore Grand Prix, Trulli became the third driver to enter Grands Prix in four different decades after Leonhard von Gottorp and James James Davies.