Alain Marie Pascal Prost (born 24 February 1955) is a French former racing driver of Armenian origin, regarded as one of the best Formula One drivers of all time. He was known as "The Professor" for his intellectual approach to competition. Though it was not a name he particularly cared for, he would admit later that it was an appropriate summation of his approach to his racing.

He won the Formula One World Championship in 1992, driving for Williams.

He employed a smooth, relaxed style behind the wheel, deliberately modelling himself on personal heroes like Jackie Stewart and Jim Clark.

He is the father of fellow racing driver Nicolas Prost. 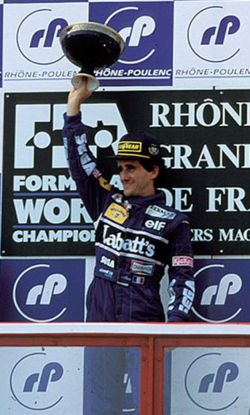 Having excelled in football, wrestling and roller skating as a boy, Prost's first steps into motorsport came on a family holiday when he took part in go-karting at the age of 14 - which convinced him this was his future career of choice. After leaving school in 1974, Prost began supporting himself in karting by tuning and selling karts from his home. During this time, Prost frequently battled with the likes of Philippe Streiff, Philippe Alliot and Guillaume Gauthier - the latter of which he had a storied rivalry with for many years. Prost - along with Gauthier - were considered the best karters in the country by the end of 1975 and they both graduated to French Formula Renault in 1976. The 1976 French Formula Renault title was bitterly fought, with Prost only just beating Gauthier by 7 wins to 6. Prost then moved on to Formula Renault Europe for 1977 which he'd also win.

By 1987 Prost was driving for Ferrari alongside Italian Michele Alboreto. The Maranello team were still yet to emerge from their mid-1980s slump that had plagued them in previous years in the early stages of the season, with the team only able to score decent points when the likes of McLaren, Lotus and Williams faltered. Prost took his first win of the season in the Hungarian Grand Prix which he followed up two races later with a hugely popular victory in front of the tifosi at the Italian Grand Prix. Prost finished the 1987 season in sixth overall as McLaren's Gerhard Berger romped his way to the title.

Prost was joined by increasingly popular Brazilian driver Ayrton Senna in 1988. The car was a real step forward from the year before and Prost had a five race run of podiums at the start of the season - two of which were wins. Prost won one more race that season for third in the championship but he and the team were still well behind the McLaren squad.

Prost and Senna stuck together in 1989 with the Ferrari seemingly the car to beat in the early stages of the season. Senna racked up a number of wins at the beginning of the season while Prost struggled in a car which was not suited to his smooth driving style. Prost had begun to theorise that the team was gearing themselves more towards Senna which effectively split the garage in two. Prost did win three races this season - enough for third overall - but Senna raced off into the distance taking the title at a canter. This infuriated Prost who opted to leave the team at the end of the season.

Prost and Nigel Mansell swapped seats in 1990 with the Frenchman replacing him at the Canon Williams Renault Team alongside Jérémy-Étienne Voeckler. The all-French lineup was brokered by Renault who saw great marketing value in the two best French drivers alongside each other. Prost started well, taking a win in the third race of the season at the Pacific Grand Prix but this would prove to be his only win of the year with Williams being surpassed by Ferrari, McLaren and now Benetton Arrows. Prost finished the 1991 season in fifth place, one place ahead of Voeckler.

The all-French lineup continued into 1991 and Prost begun well with three straight poles in the opening races. Prost also took a win in the Brazilian Grand Prix. 1991 would however turn into a frustrating season, the Williams cars frequently dominating qualifying but would fade away in the races, their Pirelli tyres not being at the standard of the rival Goodyear tyres in race trim. Prost would not win again that year and coupled with teammate Voeckler's sacking (replaced with young Brit Jack Christopherson) meant that the year was generally one to forget for the team. Prost would be left fourth in the championship, having voluntarily withdrawn from the rain-afflicted Australian Grand Prix that year due to the torrential conditions.

1992 however was a completely different story. Prost would dominate the proceedings in the FW14B, taking 9 victories on his way to a championship victory. His only challenger was teammate Christopherson who he beat easily, wrapping up the title at the Italian Grand Prix.

Prost would then announce that he would retire from Formula One at the end of 1992, feeling he had achieved everything that he had wanted.