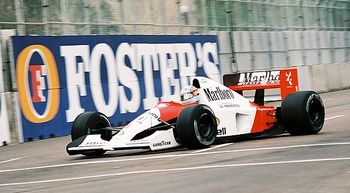 Brendon Cassidy, driving for McLaren in 1991

Brendon Cassidy Sr. (born 19th January, 1958 in Fort Wayne, Indiana, USA) is a American former racing driver and team owner famous for his appearances in IndyCar and Formula One. He won the Formula One championship in 1991 while driving for McLaren.

He is the father to fellow racing drivers Brendon Jr., Ashley, Karen and David Cassidy.

By 1987, Cassidy was established in Formula One and driving for Canon Williams Honda Team alongside Brazilian driver Ayrton Senna.

Despite only winning two races, Cassidy would finish the season in second overall behind McLaren's Berger by only a single point. Frustrations with reliability saw Cassidy leave Williams at the end of the season, despite the team taking pole in fourteen out of sixteen races in 1987.

1988 would see Cassidy swap seats with Nigel Mansell, with the American taking the British driver's seat at the USF&G Arrows Zakspeed team.

Cassidy, joined by Chris Dagnall would take points in most of the races in 1988 - with his best result (and only podium) being a second place at the Italian Grand Prix. He would finish the season in sixth place, ahead of Mansell.

Cassidy would remain at Arrows in 1989 - once again alongside Dagnall for the season. Cassidy and Arrows were yet again a very strong package in the upper midfield, taking several podiums throughout the year - peaking at the United States Grand Prix, where Cassidy led home Dagnall for his and Arrows' first 1-2 finish in Formula One. However, Cassidy would only go on to take four more points finishes - inlcuding 3rd in the Hungarian Grand Prix, Cassidy's only other podium finish that year - but finished the season on equal points with Dagnall, thanks to the Brit racking up more points after the US Grand Prix. He soon found himself out of favour at Arrows, as new title sponsor Benetton requested a world champion team-mate for the up-and-coming Chris Dagnall, something which Cassidy clearly was not. As a result, the team hired 1986 world champion Guillaume Gauthier to partner Dagnall, leaving Cassidy with no other option but to head to Lotus to take Gauthier's place.

Cassidy began the 1990 season at Team Lotus alongside Frenchman Frédéric-Maxime Voeckler. The car he was in was a fairly average upper-midfield contender - with Cassidy regularly finishing in the top ten. Cassidy's finest moments at Lotus came when he took an excellent fourth place at the Belgian Grand Prix.

However, Cassidy's season would dramatically change on the 12th October, when McLaren's Alessandro Nannini was involved in a helicopter crash whilst flying over his Siera vineyard, suffering a severed right forearm. Cassidy was immediately signed as Nannini's replacement at the Woking team for the final two races of the season alongside Gerhard Berger. Cassidy repaid McLaren's trust in him by taking pole, fastest lap and the win in the final two races in Japan and Australia.

Cassidy's performance was rewarded with a contract for 1991, where he'd battle with Berger all season for the title - taking an incredible nine wins. Cassidy was victorious and as such became the first American World Champion since Mario Andretti.

He would seek to defend his title in 1992, however McLaren were only the third best team that season so he struggled. He would not finish higher than third place that season, languishing in sixth place in the championship at the end of it. Cassidy would opt to leave F1 at the end of 1992, choosing to return to competing in American open-wheel racing series.

In 1988, whilst racing for Arrows in Formula One, Cassidy also raced a part season in the World Touring Car Masters for his own Gulf Racing team - racing a Ford Sierra RS500 in the top class of the series. His best result, however, would be a win in the non-championship Tooheys 1000 at Bathurst for the works Kaliber Industrial Control Services Racing Ford team alongside former Formula One driver Thomas Nurmester.