Takuma Sato (born 28 January 1977 in Tokyo, Japan) is a Japanese racing driver mostly known for his appearances in Formula One, Super Formula and IndyCar. He is widely considered to be one of the all-time greatest racing drivers from Japan.

Sato announced his retirement from full-time open wheel racing at the end of the 2020 Super Formula season, where he competed for Dandelion Racing. 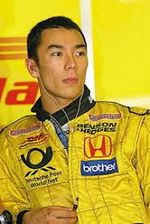 Sato made his Formula One debut for Jordan in 2002, after serving in 2001 as the team's test driver. He scored his first Formula One points with a fifth place at the French Grand Prix. He finished his first career season with a points finish at Suzuka, a massive achievement for Japanese motorsport.

After scoring two eighth place finishes in 2003 at the British and German Grands Prix, he was injured in a big practice crash in Hungary. While recovering, Honda announced they would not re-sign with Jordan in 2004, and that Sato left the team after a mutual agreement was reached between himself and the Jordan team. He was replaced by HWNSNBM and Daniel Melrose.

Sato made one more appearance in 2003 at Suzuka, finishing 6th at the wheel of a BAR, a drive that, along with his connections to Honda (who had bought a 45% stake in BAR), secured him a seat with the team for 2004.

Sato flourished in the shortened 2004 season, with a vast amount of the races taking place in the Asia-Pacific region. Sato's first strong result came in the season opening Australian Grand Prix, where he took his maiden podium with a third place behind the two Ferrari cars. Sato scored consistently and finished the season with an emotional third place finish in his home Japanese Grand Prix - enough for fifth place in the World Driver's Championship and the best of the non-Ferrari or Williams drivers.

Davidson and Sato continued for another season in 2005, however the team were not as strong as they were the year before. Sato took another third place in Japan - enough for eleventh place in the standings.

Sato avoided the axe when Honda upped their investment in the BAR team and brought in defending champion Fernando Alonso to lead the team. As expected, Alonso was far superior to Sato but even then Sato managed another podium - this time a career-best second place in the Brazilian Grand Prix.

Sato's Japanese sponsors saw fit to move him to Honda's secondary team for 2007, leading the Super Aguri team in their second season. He was partnered by British rookie James Rossiter. Unfortunately neither of the pair were able to score points - Sato's best result of the season was a 9th place in Australia.

The following season was pretty much the same thing as both Sato and new teammate Daisuke Itō, who came from Aguri Suzuki's Super GT program, failed to score points once again. Sato remained for another year at Super Aguri in 2009, picking up four points (best result of fifth in the rain-shortened Malaysian Grand Prix) and 20th place in the drivers' championship.

In 2010, Sato was still established as team leader at Super Aguri - racing alongside Sammarinese driver Andrea Acuri in the early parts of the season. Sato outclassed his teammate, albeit without taking many points finishes - which saw Acuri be sensationally replaced by multiple time World Champion Michael Schumacher. An otherwise fairly anonymous season saw Sato finish in 19th place. The arrival of Schumacher meant resources were stretched at Super Aguri and Sato was released at the end of the season.

Sato's Honda connections saw him make the move to the Canon WilliamsF1 team alongside Esteban Guerreri and Jarno Trulli. The 2012 Williams Honda was a strong package - and Sato was able to take two wins over the course of the season in the United Kingdom and Singapore on his way to seventh in the standings. Despite this strong season, Sato was not retained.

Sato made a one-off appearance for the Works Peugeot team at the Singapore Grand Prix, taking a ninth place.

Sato rejoined the grid for the season-ending Chinese Grands Prix with the Eni Valerian Formula Ferrari team in what he described as "testimonial races", after finishing the first race in 20th, he improved and finished the second race in eleventh - finishing his F1 career in the same position he finished his first race, the 2002 Australian Grand Prix.

After being out of a Formula One drive in 2011, Sato made the jump stateside to the IndyCar series, joining the KV Racing outfit as a representative of Honda. Sato was quickly on the pace in the series and took three top five finishes, his best being a fourth place at Mid-Ohio. He finished his debut season in 13th overall, second in the Rookie class behind James Hinchcliffe.

Sato returned to the United States after his Williams drive expired, signing with A.J. Foyt Enterprises on a multiple year deal. Sato took his first IndyCar win in the third race of the season at Long Beach, which he followed up with a second place in Sao Paolo. The rest of his years in IndyCar before the US Open Wheel collapse were fairly anonymous - Sato had established himself as a reliable midfielder who picked up top-10 points on the regular.

After a short stint in Japan, Sato returned to IndyCar once again in 2020 for a one-off race at the Indy 500 driving the third entry for Ed Carpenter's team.