He is the father of fellow F1 driver Tomas Scheckter.

His elder brother, Ian also raced in Formula One. 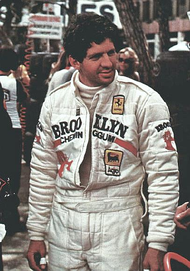 Unfortunately the next round - his home Grand Prix at Kyalami - was somewhat of a disaster, retiring from a near-thirty second lead with a transmission failure.

A pole and win at Long Beach was followed by second places in Spain and Monaco.

Following the death of teammate Niki Lauda at the Soviet Grand Prix, Ferrari withdrew from the French Grand Prix - before returning to the championship at Brands Hatch with Patrick Depailler in Lauda's place. With Lauda out of the title picture, the battle for championship honours would now be fought between Scheckter and McLaren's Carlos Reutemann.

Scheckter and Ferrari returned to form after Britain, taking a win in Germany and following Depailler home to an emotional one-two finish in Austria.

A transmission failure at Zandvoort was requited for in the Scuderia's home race at Monza with Scheckter leading home yet another one-two finish in front of the adoring tifosi - despite contact with a swerving Hans-Joachim Stuck early on.

In the final three rounds, Scheckter could only muster a solitary finish - a second place at Watkins Glen. At the season-ending Japanese Grand Prix, Scheckter would leap into the lead of the race at the beginning before a suspension failure seemingly consigning the championship to his Argentinian rival Carlos Reutemann. For much of the early stages of the race Reutemann held the lead but a miraculous suspension failure on the Argentine's McLaren M23 forced a retirement - meaning the driver's title would be returning to Maranello for a second year running - albeit in the hands of Jody Scheckter.

An emotional Scheckter collected his trophy at the FIA Awards Gala in Monaco, clutching an Austrian and South African flag - dedicating his championship victory to his fallen teammate.

Scheckter entered 1977 as defending champion, remaining at Ferrari with Patrick Depailler brought in full-time in the second car. The season started miserably for Scheckter - the Ferrari didn't have the race pace in Argentina before an engine failure, and a more promising outing in South Africa was again curtailed by reliability. To rub salt into the wound, Depailler had started from pole in Argentina and had won the South African Grand Prix. Things changed come Long Beach, as although Depailler started from pole position again, Scheckter drove the perfect race to beat McLaren's Tom Sneva to the flag taking his second consecutive win at the US Grand Prix West. Scheckter would then follow this up with a win in Belgium and a third place in Monaco.