Jacques Joseph Charles Villeneuve (born April 9th, 1971 in Saint-Jean-sur-Richelieu, Quebec, Canada) is a Canadian former Formula One World Champion, team owner and executive. He is the current chairman of Formula One Management. 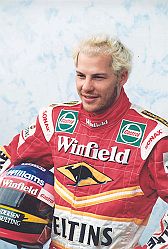 He is the son of fellow Grand Prix driver Gilles Villeneuve.

The following year, Villeneuve and Williams would be outclassed by the superior quality of the Ferrari and McLaren teams, with Villeneuve only able to pick up podium finishes when the Ferrari and McLarens ran into trouble. Villeneuve's best result of the season would be a second place in the deluge at the Belgian Grand Prix, although this achievement was dwarfed by the maiden win of Jan Magnussen. Villeneuve would finish as "best of the rest" in fifth place in the championship.

For 1999, Villeneuve made the jump to F1 newcomers British American Racing, whom had just taken over the ailing Tyrrell outfit. Despite claims from team management that BAR would be able to win from the very first race onwards, neither Villeneuve or Sammy Jones were able to pick up a single point in 1999, leaving BAR joint bottom with Lola.

Villeneuve and Jones remained at BAR into the new millennium, and the team brokered a deal with Honda to become the exclusive works team for the Japanese manufacturer. The changes seemed to suit the pair, with Villeneuve and Jones both being able to score points in the early races. However Villeneuve was outclassed by Jones, who outraced the Canadian to score 10 points to Villeneuve's 6, including the team's maiden podium at the Malaysian Grand Prix.

Both drivers remained at the team heading into 2001, and it soon became clear who was the better driver in the team. Villeneuve outraced Jones twice only, and scored a measly 6 points compared to his teammate's 18, who scored the team's maiden win at the German Grand Prix. As a result of this (and a management coup which ousted Craig Pollock, Villeneuve's manager), the Canadian would not be retained by BAR into 2002, being replaced by the team's reserve driver Justin Wilson.

After a serious accident at Indianapolis, Renault's Mark Webber was ruled out with injury - providing an opening for Villeneuve whom had been maneuvering for a F1 return for three years. Villeneuve took part in three races for the French team, his best result being a fourth place in the Brazilian Grand Prix.

Villeneuve made his full-time return to the grid in 2005, racing for Sauber Petronas alongside Pedro de la Rosa. Villeneuve would easily have the edge over his Spanish teammate, scoring 9 points while De La Rosa scored none, before the Spaniard was sacked after the British Grand Prix, and replaced with Australian Dave Simpson. The Canadian would score a further 5 points on his way to 13th in the championship, with 14 points in total.

In 2006, Sauber would be bought by BMW, and Villeneuve would have a new teammate, Ferrari refugee Daniel Melrose. The pair were very evenly matched over the course of the season, with Villeneuve having a slight edge early on but Melrose pulling forward towards the end of the season. They would both finish the season with 30 points and one podium, although Melrose would be placed ahead in the championship courtesy of an extra 4th place from the Australian. Villeneuve would thus finish 9th in the championship.

The pair would remain at the team going into 2007 - but Villeneuve failed to make much of an impact on his third season, the Canadian failing to make the podium on any occasion while his Australian teammate took the Driver's Championship. Villeneuve's lacklustre results cost BMW Sauber the constructor's crown which in turn saw the Canadian be removed from the seat ahead of 2008.

Villeneuve returned to the grid in 2010 as team leader for the newly-entered Stefan Grand Prix alongside Kazuki Nakajima. After a pair of retirements in the opening round, Villeneuve would hit back with a win and a second place at the United States Grand Prix as well as a win in the season ending Abu Dhabi Grand Prix. Allegations of espionage marred proceedings, and Villeneuve left the team at the end of the year to retire.

However, after the disqualification of Jenson Button early in 2011, Villeneuve was called up to race for Red Bull at the Japanese Grand Prix.

In the summer of 2012, it was announced that Villeneuve - with help of Italian GP2 team Durango - had obtained a license to enter a team in the 2013 season. Jacques Villeneuve would race for the team alongside Frenchman Alexandre-Laurent Voeckler. He'd race for the team until the 2014 German Grand Prix, where he'd injure himself in a high speed accident. He'd retire from active competition at the end of the season.

Villeneuve Racing would remain in F1 for one more year before closing its doors in late 2015.

Villeneuve was announced as the new chairman of Formula One Management on August 1st, 2020 replacing outgoing chairman Achille Lunardi whom had resigned for "personal reasons".