Kimi-Matias Räikkönen (born 17 October 1979 in Espoo, Finland) is a Finnish racing driver who formerly took part in the FIA Formula One World Championship. He made his debut at the 2001 Canadian Grand Prix, driving for Jordan as a stand-in to the injured James James Davies. After his retirement from Formula One he became a rally driver competing in the World Rally Championship. Räikkönen is considered by many pundits to be one of the best drivers to have not won the Formula 1 World Championship. 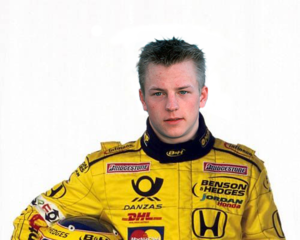 Kimi Räikkönen, pictured before his debut at the 2001 Canadian Grand Prix.

Kimi Räikkönen was an unfamiliar name to the racing world before the 2001 season, previously taking part in Formula Ford and Formula Renault, as well as testing for Williams in 2000. Before the season, he was announced an official test driver for Jordan, and eventually made his Formula One debut in Canada - he qualified an impressive eighth, but unfortunately for the Finn, the Honda engine inside the EJ11 expired early into the race. He made three more starts after Davies was again injured, this time at Spa. His best finishes were two 9th places in the United States and Japan.

Räikkönen resigned with Jordan for 2002 but this time, his role has been promoted to full-time driver, partnering Japanese debutant Takuma Sato. After finishing eighth in the season opener at Albert Park, "Iceman" immediately delivered, scoring two fourth places in Malaysia and San Marino, before going into a slump and failing to score points in several races with the average machinery - until he scored again at the British Grand Prix. The Finn eventually finished the season in 10th place.

Räikkönen impressed so much that Peter Sauber gave him an offer he could not reject, and therefore replaced David Coulthard in Sauber for 2003, partnering the Frenchman Sébastien Bourdais. He'd become a regular points scorer in the mid part of the season and finish in 11th overall.

He'd remain with Sauber in 2004, this time being joined by highly rated Australian Daniel Melrose - whom joined the team by virtue of being in Ferrari's young driver programme. Räikkönen struggled in the shortened 2004 season, only taking a handful of points finishes compared to his teammate, who outclassed him all season.

Räikkönen set off for pastures new once again in 2005, this time landing himself a drive with the Mild Seven Renault F1 Team alongside pre-season favourite Fernando Alonso.