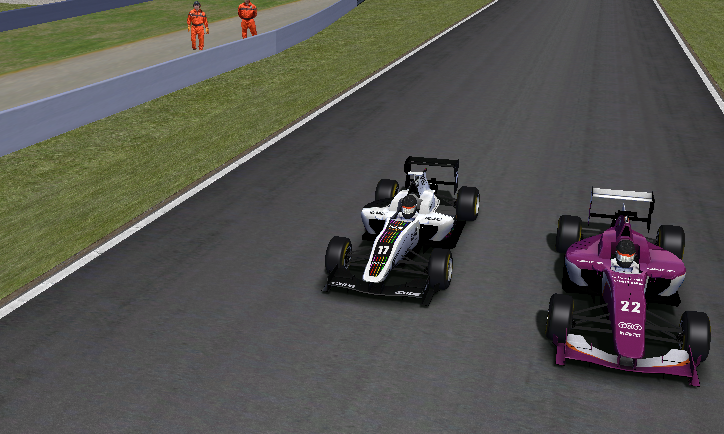 Júlíana Ívarsdóttir made it two out of two for ICE-3 Racing, taking a late-fought win in the 2018 AR2.0 sprint event at Magny-Cours.

Ívarsdóttir and Postma gave the fans at the Nevers venue a thrilling scrap in the last few laps, each swapping the lead in turn before the Icelandic driver took inspiration from her team-mate’s own race-winning move; she took a tow from Postma on the run to the Adelaide hairpin, and drew the Dutchwoman away from the defensive line. Postma tried to make a move at the penultimate corner, but Ívarsdóttir held on to earn a popular victory.

Although Ívarsdóttir spent most of the race battling for the lead in some capacity, her opposition changed frequently as drivers found purple patches within their tyres at different points in the race; Caldeiro, May and Donnelly were all in with a chance at the beginning of the race, before Postma and Michela Martin found enough performance in the latter stages to fight for the win. Martin’s engine cried enough two laps from the end, cruelly denying the Plus One team a much-needed salvo after a miserable season so far.

The only real incident of the race involved the two newbies; Riley Griffith took her foot off the gas in the middle of Estoril, and Nelson Odewa had nowhere to go but into the back of the Venturi. Both drivers had to pit with damage, although they were able to return to the circuit relatively unscathed. Griffith earned a warning point for her part in the incident.