Stéphane Jean-Marc Sarrazin (born 2 November 1975 in Barjac, France) is a French professional racing driver who participated in fifty Formula One Grands Prix, all for the Prost team. Apart from his Formula One forays, Sarrazin is also an accomplished sports car racer, and regularly takes part in the Tour de Corse rally.

Sarrazin spent his entire F1 career with the French Prost team, making his race debut in 1999 alongside Gianni Morbidelli. Sarrazin scored on two occasions in 1999, taking sixth place finishes in Spain and Portugal.

After a pointless 2000, Sarrazin's best results came about in 2001, where he would finish in fourth on two occasions - in San Marino and Germany. Sarrazin would leave F1 ahead of the 2002 season.

After leaving Formula One, Sarrazin moved onto the sports car scene, participating in every Le Mans 24H since 2002. 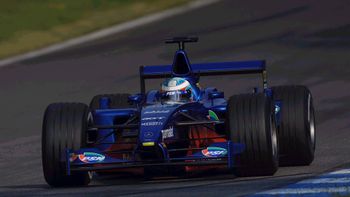 Sarrazin during the 2001 German Grand Prix.

Sarrazin made a return to single seaters in the 2018-19 FIA Formula E Championship with Panthera Compétition. Racing alongside fellow ex-F1 driver Nick Heidfeld, Sarrazin's best finish was a tenth at Sao Paolo.