Roland Asch (born 12 October 1950 in Altingen, West Germany) is a German racing driver most famous for his appearances in the World Touring Car Masters, winning the Class C Championship in 1988. 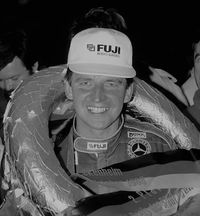 Roland Asch after winning a WTCM race in 1988.

Asch would dominate the Class C championship throughout the season, only finishing out of the points on three occasions (mechanical retirements) on his way to the title.

Much of his challenge would come from his Spanish teammate Perez-Sala and the Euromotor International BMW M3 of Mauro Baldi.

The following season, Asch was expected to resign for Mercedes-Benz with a greatly improved contract on merit of his class win the year before.

Surprisingly, Asch rejected the offer and left the German manufacturer to join the works Nismo Motorsport team alongside Naoki Nagasaka, Toshio Suzuki and Masahiro Hasemi. The team was using the controversial Nissan Skyline R32, which had been banned at the start of the 1988 season due to issues with homologation. Asch finished 1989 in eleventh overall and sixth in class, taking a single win at the Brno round.

Asch was subject to another bid from Mercedes ahead of 1990, but Asch remained with Nissan for a second year. Asch finished the season in ninth place overall - with a single win in the Endurance race in Belgium his best result.