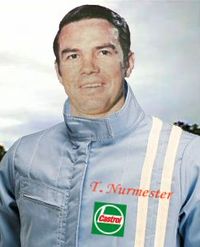 Thomas Nurmester (b. 25th September 1946 in Whitby, North Yorkshire, England) is a retired British racing driver. He is best known as the father of Nathan and Nick Nurmester and as the Assistant Technical Director of the FIA in the 1990s. He won the 1988 Bathurst 1000 alongside Brendon Cassidy, driving a Kaliber Ford Sierra RS500.

Nurmester started his career relatively late at the the age of 17, driving go-karts. However, he clearly had an innate talent for racing, and quickly rose up in the ranks. In the late 60s and early 70s he was a force to be reckoned with in the World Sportscar Championship. But this didn't satiate his hunger for success enough, and his lifelong dream was to drive in Formula One. However, this was denied by his lack of sponsorship; a factor that only recently had become important in the sport. He continued through the seventies driving in the WSC, winning the FIA Cup for Cars up to 2 Litres in 1976.

Nurmester's debut season in Formula One was a season of ups and downs - a season which saw him race for as many as three different teams over the course of the season.

Nurmester's first race was with the Ligier Gitanes outfit at the second round of the season, the South African Grand Prix - having already been signed as their reserve driver for any free races he had. A race of attrition meant that Nurmester would follow teammate Jacques Laffite into third place - giving the Briton a podium on his debut.

Following this miraculous debut, Nurmester would be knocked into the doldrums of pre-qualifying - joining the struggling Wheatcroft Racing stable for the early parts of the European season, failing to pre-qualify for the Spanish, Belgian and Monaco Grands Prix.

The Soviet Grand Prix would give Nurmester another shot at the Ligier, to which he would repay by recording a second place finish behind then-championship leader Carlos Reutemann. Despite a podium on both appearances for the French team, this would be Nurmester's last appearance for Ligier.

A return to Wheatcroft and pre-qualifying beckoned for the German, French and British Grands Prix before an opportunity with Wolf-Williams Racing arose for four more races. He took points finishes in Holland and Canada - which would be his final race in 1976. Nurmester finished the season in 12th overall.

Nurmester's showings in the previous year earned him a plum spot at Lotus driving their revolutionary 78 chassis alongside Mario Andretti.

Nurmester would take a fourth place finish in the opening round of the season in Argentina. He followed this with a career first Pole Position at Kyalami - the site of his debut in 1976 - but his race would end in heartbreak. On track for the first win of his career, engine failure saw him forced to watch the remainder of the race from the sidelines, with Patrick Depailler going on to take an unlikely victory.

He followed teammate Andretti home for a Lotus 1-2 at the fourth round of the season in Spain, giving Andretti the lead of the championship, but this would prove to be the highlight of the next four races. In Long Beach a tangle with Carlos Reutemann and James Hunt eliminated from the race, and promising drives in Belgium and Monaco were again curtailed by reliability issues. Podiums followed in Tuscany and the Soviet Union before he was able to pick up his first Grand Prix win in Austria. Nurmester would follow this up three rounds later with another win in the United States Grand Prix, a race in which his teammate Andretti sealed his first title.

Nurmester signed a new Lotus contract for 1978 alongside World Champion Mario Andretti. The new season would bring a new car, but Nurmester was taken out of point scoring results in the first two events by retirements.

Nurmester and his eponymous team entered the first season of the World Touring Car Masters, with a Ford Mustang for Nurmester and a Escort RS Turbo for Lucio Ricchetti. Nurmester was a frequent point scorer in 1988, and finished the season in twelfth place in Class A. Nurmester did not return in 1989.

After retiring from active motorsport in the late 1980s, Nurmester started a career in the governing body FIA, eventually reaching the post of Assistant Technical Director in 1995. In 1997, he applied for the FIA presidency, but lost to Chris Forbes in the end. He continued in various jobs for the FIA for a few years after that, until in 2008 he announced a complete retirement from motorsport, at the age of 62.

Nurmester was married to Laura in 1970, and the couple had a son, Nathan in 1972. They divorced in 1984. Thomas tried to bring Nathan up as the next British F1 star, but initially his progress was slow and Thomas was getting doubtful of his son's potential. In early 1987, Thomas fell in love with a Finnish exchange student. This affair eventually resulted in the birth of Nick, and when Thomas started to concentrate on him (partly due to believing that the Finnish heritage would make it easier for him to race), Nathan grew more and more estranged of his father. In 1992, he finally cut all the ties with his father, and the two have not talked with each other ever since.