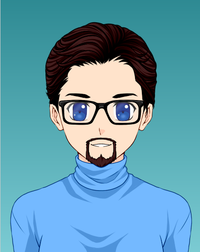 Dennis Mignolet is a (fictional) racing driver. Born in 1973 in Hasselt, Belgium. He is the older brother of the more known Ron Mignolet.

Dennis started racing in Belgian Formula Ford in 1991, winning 5 races and becoming champion immediatly. Went to French Formula 3 in 1992 and won 4 races. He became 2nd in the championship. He also impressed by winning the Monaco Formula 3 race and leading the Macau Formula 3 race before crashing out of the race. The logical next step would be Formula 3000, this proved more difficult, driving for the small Belgian Astromega outfit and only scoring points on 3 occasions. A 13th place in the championship was the result.

However, after some succesful tests for Ligier and Larousse in 1993, he was given a full-time contract for 1994 in the F1 Rejects Grand Prix 2 Championship. The season turned out dissapointing, as the Ligier proved slow and unreliable, and points were rare. Dennis season was saved by a magnificent second place in the Japanese Grand Prix. This was a tactical masterpiece, as many other drivers ran out of fuel, but Dennis choose to pit in time. Thanks a 4th, a 5th and a 6th place scored over the rest of the season, Mignolet finished a decent 11th in the championship standings with 12 points, only beaten by the drivers of Williams, Benetton, Ferrari, McLaren and Jordan.

For the 1995 season, Dennis will combine driving and managing the Ligier team, now equiped with Mugen-Honda engines thanks to Reiko Megumi. The season opened nicely: Dennis finished sixth in Brazil.

Not much is known about his career from then on.

Dennis is the manager of his brother Ron Mignolet and Gio Van Dycke since 1998. He also takes care of follow Belgians Wouter Lamberigts and his sister Dorien Lamberigts.

After years of trying to set up different racing teams and managing drivers careers, Dennis decided it was time to get his last chance at racing glory, and took it with both hands, participating in the Formula One Rejects Big Car Championship with RonDen Racing Engineering . A team he set up together with his brother Ron. His results so far have been impressive.