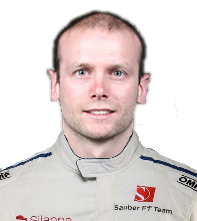 Stoneman made his Formula One debut as a substitute for James James Davies at Mercedes when the Briton suffered a minor injury at the Japanese Grand Prix. Stoneman finished his debut race in 19th place, having started at the back of the grid.

Stoneman then moved across to Ferrari for the Monaco Grand Prix weekend when regular driver Fernando Alonso was excluded. Stoneman managed a tenth place and a first podium finish with second place.

He was then drafted by Renault to replace Nicolas Prost for one of the Irish Grand Prix rounds, taking a fifth place finish in Athlone. He was retained for the European Grand Prix at Mugello, where he took a further eighth place.

Ferrari came calling once more at the Uruguayan Grand Prix, taking a best finish of eleventh.

Stoneman's impressive stand-ins made him an attractive candidate for a full time drive in 2012 - however Stoneman was diagnosed with testicular cancer in the latter part of 2011 - effectively ruling him out of a drive for a number of years until he recovered.

By 2014, Stoneman had recovered from his cancer and was trying to break back into Formula One. He made a brief reappearance in the United States Grand Prix with Marussia but failed to make the finish.

After a year of testing with the Mercedes team, Stoneman continued his recovery by standing in for Evgeny Restov at Calinetic Petronas for two races - his best result being twelfth in Hungary.

Stoneman made a further substitute appearance in 2018, racing in the British Grand Prix and finishing in 16th place.

Stoneman finally managed to secure a full-time drive when he was announced as Pastor Maldonado's partner at the British Airways Sauber F1 Team on a two-year deal. Stoneman began the season well and established himself as worthy of such a plum drive - tussling for the lead of the championship with his Venezuelan teammate for much of the early stages of the season.

Stoneman's consistent - if conservative - approach to the championship battle attracted ire from FOM Chairman Achille Lunardi; who stated in a ESPN interview that Stoneman was not among the best drivers in Formula One, and him winning the championship would be a concern. This attracted a firm response from many corners of the paddock - most notably Caterham Team Principal Edouard Martel who expressed the respect that the rest of the paddock held for Stoneman.

Stoneman went on to win two races that season on his way to second in the championship behind Maldonado - ensuring Sauber won the Constructor's title as well.