Arsenio Matarazzo (b. 19th May 1954 in Corleone, Sicily, Italy - d. 8th July 2005 near Catanzaro, Italy) was an Italian "gentleman" racing driver. He was also known for his ties to the Sicilian Mafia, which are generally believed to have ultimately lead to his untimely death.

Arsenio was the second-oldest of a total of five siblings. His father earned the family's living by maintaining a small mechanic's workshop, while his mother stayed at home to take care of the children. Arsenio would often spend time in his father's workshop, which earned him a lifetime interest in cars and motorbikes. He was determined to get out from poverty and studied hard in his teens, although lack of money meant that he could never study beyond high school level so he was forced to work odd jobs to provide for his mother and help in his father's workshop.

However, he was then offered work by one of the Sicilian crime bosses; Arsenio's considerable height (185cm) and muscular build made him a perfect candidate to become an enforcer. Tired of always having to live from hand to mouth, he happily accepted and soon became one of the best and most ruthless in his business, helped by his higher-than-average intelligence which allowed him to use psychological means of extortion besides the usual physical ones. 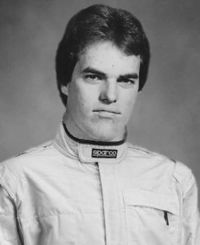 Matarazzo made his Formula One debut in 1978, driving for the Dywa team alongside Renzo Zorzi.

By 1987, Matarazzo was driving for the Larrousse Calmels team alongside Frenchman Philippe Alliot. Matarazzo would finish in the points on three occasions, his best result being a fourth place at the European Grand Prix on Dijon-Prenois. He finished the season in eighteenth place.

Matarazzo made the brave decision to leave Larrouse in 1988, making the jump to Coloni alongside Brazilian driver Roberto Moreno. Matarazzo attempted to qualify for the first ten races but was unsuccessful on any occasion. Gabriele Tarquini replaced Matarazzo from the Yugoslavian Grand Prix onwards.

His next experience didn't come until the 1992 Life Grand Prix of Italy, where he worked as a security guard - to save money, the series' organisers Finanz-Sichereit Konglomerat had contacted the Cosa Nostra to provide some of the track personnel at reduced prices in exchange for helping the crime bosses to stash their profits on Swiss bank accounts. Many new teams in need of quick cash would join the grid for the 1993 Life Grand Prix Series season, which gave Matarazzo another chance at racing competitively. So at 39 years of age and bankrolled by an influential Sicilian crime family, Matarazzo joined MacKenzie Financial to partner fellow Italian Jose Braggia. Aside from a few one-off appearances in World Touring Car Masters, he hadn't driven competitively after 1988 and this clearly showed as he DNQed for the first two rounds in Argentina and Brazil. However, at the Venezuelan GP all cars automatically qualified for the race, so Matarazzo got his first start in the series. After much attrition he found himself 7th, but retired on lap 40 after a brake failure spun his car around.

He then failed to qualify for all subsequent events before Germany, another race all cars automatically qualified for the race. However, he was taken out quickly in a collision with Rachel Graham. Normal service resumed in Poland where he once again recorded a DNQ. The next race where all cars qualified was in Austria, however Matarazzo was quickly eliminated due to an engine failure. After two more DNQs in Italy and France, he started in Namibia which was another free-for-all event. His race ended in a collision with Natascha Zaugg - the eventual winner of the race - while running 11th. In Japan he was taken out in the start chaos resulting from Christopher Arthurs' stall, while in both Malaysia and Indonesia his car's suspension failed. After another pair of DNQs in New Zealand and Australia, he started the last ever LGPS race in Macau but retired with brake problems while running 10th.

By then his mafia partners had found out better ways to launder money and thus withdrew their funding for Matarazzo, ending his race career for good. 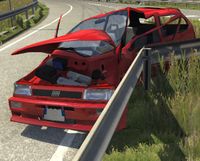 Matarazzo's car after the accident.
After his racing career was over, Arsenio returned to Sicily, continuing to work for the mafia while also taking up a larger role in his father's workshop. He soon grew tired of the quiet countryside life, having visited locations all across the globe during his racing career, but as his enforcer skills were still a valuable asset to the local crime boss he was no longer allowed to travel abroad freely. In his boredom Arsenio then attempted other forms of sports, such as competing in illegal fistfights, but his age was becoming a hindrance. After a few close brushes with death he was deemed unfit for the enforcer job by the local crime boss, although he was still very respected in the family. Arsenio was then offered a place higher in the crime family structure, but his near-death experiences had changed the way he looked at life and thus he decided to end his criminal activities completely. He turned himself in to the police and started a new life in the Calabria region under a witness protection program.

After a couple of years of relatively peaceful life, Arsenio was killed in a car accident near Catanzaro on 8th July 2005. Eyewitness reports state that he was exiting the E848 road at a high speed when he suddenly lost control of his 1990 Fiat Uno Turbo i.e., sliding right into the road barriers with the driver's side of the car first. Although an ambulance arrived within minutes of the accident, the severity of Matarazzo's injuries was so great that he died on the scene. A police investigation on the accident confirmed that although Arsenio was speeding at the time, the lead cause of the accident was a simultaneous lockup of both rear wheels due to a handbrake malfunction. As Arsenio was well known around the community for taking a good care of his car, it is generally believed that the accident was caused by an act of sabotage, most likely ordered by his former Sicilian employers. However, so far no suspects have been arrested regarding the case.