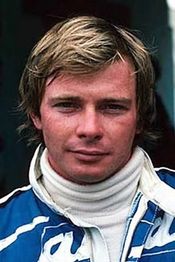 Pironi made his Formula One debut in 1977 with the Tyrrell team, driving alongside Boro refugee Héctor Rebaque. Despite Tyrrell being unable to score any points in the previous year, Pironi was able to grab an unexpected point in the season-opening Argentine Grand Prix. For much of the rest of the season, Pironi would be plagued with reliability issues. However, fortunes turned around at the end of the season, when Pironi improved his career-best finish with a fourth place at the United States Grand Prix.

Pironi would sign a new contract for 1978 which would keep him at the team for another year, alongside Robert Kagan. Pironi's season began in good fashion, taking fifth and fourth in opening two races. After a 6-race pointless streak, the Frenchman then took fifth at the British Grand Prix and scored his first career podium (and Tyrrell's first podium in three years) at his home Grand Prix as he led a Tyrrell 3-4 finish with Kagan close behind.