The 2011 F1RWRS English Grand Prix was race seven of fifteen in the 2011 F1RWRS season. It was held at Snetterton, Great Britain, and was won by Daniel Melrose.

Dougal Kerr, a 34 year-old white van champion, entered in F1RWRS for his first race with a spare car donated to him by Pacchia. He did not qualify for the race. Japanese driver Barii Mori also joined in the series after being picked up by Team Phoenix.

In pre-qualifying, Nathanael Spencer and Ashley Watkinson got the same time to top the timesheets. In the DNQ spots, Hagane Shizuka, Sammy Jones, Douglas Mann and John Zimmer were among the non-qualifiers. In qualifying proper, Watkinson had the edge, taking pole over David Koczo. Spencer was sixth while Frank Zimmer was third.

At the start, Watkinson led the first lap while the backmarkers shuffled around. On Lap 2, Koczo made a mistake and fell back a few positions. A lap later, Watkinson had an off and Frank Zimmer took the lead. The top three positions shuffled around a bit, with Koczo taking second but losing it two laps later. On Lap 8, the order was Zimmer, Watkinson, Koczo, Simpson and De Bock followed by Spencer and the remainder of the field. A flurry of stops also took place between laps 8-15 with Daniel Melrose, James Davies, Gary Cameron, Pippa Mann and Koczo all pitting. Koczo pitted from fourth, but he was leapfrogged by Cameron after a brilliant stop by the Calinetic pitcrew.

Zimmer and Watkinson continued to battle for the lead while Spencer lost third to Simon Redman after an off. Redman then passed Watkinson but lost the spot a lap later. Dave Simpson then took the lead from Frank Zimmer on Lap 16, just after the halfway point of the race. Giovanni Roda was also up there, battling with the ArrowTech of Nicolas Steele for a podium spot. Simpson and Zimmer broke away from the field, battling furiously all the way. Meanwhile, most of the drivers in contention (barring Redman, who was in sixth) had made their stops by Lap 20. 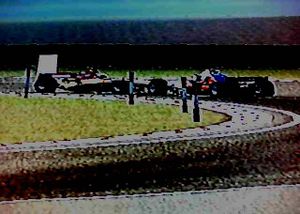 A poor picture of Simpson and Hemo Goblin's collision.

After a few laps of intense racing, Daniel Melrose pushed into the lead on Lap 20 but he was tailed by Cameron, who took second from Simpson's gripless Minardi. Unfortunately, before Simpson could pit, he collided with Zimmer, ending both their races and collecting a so far anonymous T. Hemo Goblin. Melrose managed to cruise in for the win with Cameron and Koczo behind him. Pippa Mann put in a stellar effort to take fourth followed by James Davies and Barii Mori who was the first driver to pit. Melrose's early stop basically assured him of victory as Simpson and Zimmer stayed out far too long on worn tyres. Melrose's victory vaulted him into the lead of the Drivers' Championship by nine points over Nathanael Spencer.

Standings After the Race